Raskolnikov: An Update, of Sorts 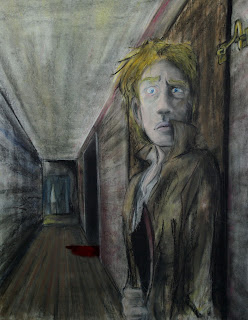 Technology was the bastard behind this. Raskolnikov didn’t have to endure such shame, even when things were at their worst. Dave’s eyes were pinned to the floor, glaring at it as it floated, seamlessly, with the rest of the capsule to the third floor.

Things had not gone to plan, not that there was much of one to begin with. Need had simply kicked in. It does. He’d just been to the supermarket down the hill and had, as usual, dragged his weekly cargo back up it in streams of sweat and curses that passers-by heard with curiosity.

She’d even smiled at him as they entered the lift together, her MILF-like hips swaying confidently as she turned and lent against the steel of the box they were in. It was unbearable, that grin, apparently forgiving him for not coming up with the rent weeks ago when it patently didn’t. Money now, it said, in all its make-up.

The shock, the give-away, was the shopping. Both knew that. It bulged with booze and convenience food, a single man’s id. For a second, she looked upon it pityingly and in turn presented herself alluringly, that disappointed pout a come-on, those rose-daubed lips a blow job dream.

Was that the missed moment? Could he have janked her into his clammy midst and forced his tongue upon hers? She may have given way. She would have done, he convinced himself, as he unpacked his groceries into their designated nooks and crannies. Some would stay there forever, untouched. A waste, just like the silent encounter with the landlady.
Posted by Unknown at 04:51