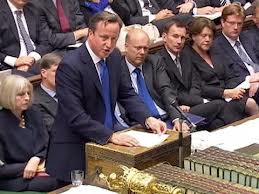 Sorry is not the Hardest Word

In Britain, saying sorry is one of the things people find easiest to do, whatever Elton John thinks. Whether bumping into one another accidentally or stepping on one another’s toes those two contrite syllables trip off the tongue almost unconsciously.  But the sheer repetition of the word in daily life ultimately renders it meaningless.

In Russia, for instance, where I once lived, people would shoulder barge you in metro stations and let the doors whack you in the face without even the thought of an apology ever crossing their minds. As someone who arrived there from the UK it came as a genuine culture shock and, at least initially, struck me as utterly uncivilised. On reflection, however, the behaviour did contain a strong degree of logic. Why express such fleeting remorse to people you have never met and are unlikely to do so again in situations which recur millions of times a day?

Last week, the UK prime minister, David Cameron, apologised to the families of the 1989 Hillsborough disaster victims for the “double injustice” they were subjected to, in the fact that their loved ones had died so appallingly and that the circumstances of the loss of life had been covered up for 23 years. His words came across as genuine and heartfelt.

In June 2010, they did so as well when he spoke after the Saville enquiry into the Bloody Sunday massacre of 1972 found that British paratroopers had shot and killed 13 fleeing demonstrators, when earlier the official claim was that the soldiers had responded to fire from paramilitaries. Cameron’s remarks then came 38 years after the events themselves. One of his predecessors, Tony Blair, in 1997 also said sorry for the potato famine that happened in Ireland 150 years earlier. His comments that the catastrophe “had left deep scars” between Britain and Ireland were welcomed by many Irish people.

Some at the time, such as Jeremy Paxman, criticised Blair’s contrition as “moral vacuousness” given the number of years that had passed between Britain’s starvation of the Irish in the 19th century and his statement. That can now be seen as a red herring after the carnage Blair bore much responsibility for, in Serbia, Iraq and Afghanistan, that truly made his apology look shallow.

Saying sorry implies that you will do your utmost not to repeat the action that you are guilty of, otherwise the gesture is worthless. And it obviously doesn’t work either that if you avoid repeatedly inflicting injustice on one person or group of people, that perpetrating exactly the same act on someone else entirely means you are off the moral hook.

This is one reason the British habit of apologising for minor infringements of others’ personal space appears as ridiculous as asking your host if you can use the toilet. On the surface both examples are marvellously humane. Think just a little about them and they really don’t amount to much. British politeness in many respects is a wonderful thing, though. Allowing others to enter or exit a shop before you do is an excellent habit as is the lack of jostling when boarding a bus. Saying “thank you” religiously when someone has done you a service, is also a fine thing indeed. Other cultures might pick up a few tips.

Having just watched the latest episode of BBC 2’s acerbic political satire series, The Thick of it, perhaps such quintessentially British etiquette stops at the doors of the corridors of power. But the tendency to say ‘sorry’ evidently doesn’t.

Cameron’s apologies to both the Hillsborough families and those of the Bloody Sunday murdered were applauded by many but it remains to be seen whether he will be in charge when a similarly appalling episode occurs in the future. Little augurs well for him. The use by the police of ‘kettling’ during recent student demonstrations against the hike in university fees is particularly poignant. Then, young people were herded into confined spaces and found movement and sometimes breathing difficult. They were kept in these situations for hours. The parallels between the students’ experience and Hillsborough shouldn’t be difficult to draw. Many have warned about the perils of ‘kettling’, just as the writing was clearly on the wall due to other incidents before 96 Liverpool fans lost their lives in 1989.

The Hillsborough disaster, to my mind, was an act of class war. The evidence produced by the independent panel proves this. Liverpool football supporters were regarded by the authorities as subhuman. A few years before the South Yorkshire police, who had officiated at that fatal semi final, were also in action against striking miners at Orgreave. The precursors were all there, albeit with hindsight.

Some have dismissed the student protestors as rich kids with too much time on their hands, though this is in fact a lie. Many are working class and from ethnic minorities who see their chances of advancement blocked by a hostile Oxbridge-‘educated’ government. Both they and trade unionists will probably take to the streets against the flagrant cuts to their livelihoods soon enough, where they’ll be met with the full force of the law. And there’ll be no apology from Downing Street, whatever happens.
Posted by Unknown at 19:10