White Heat vs Our Friends in the North 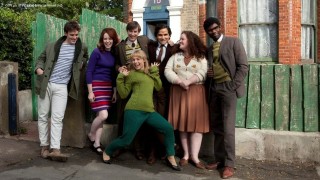 
“It’s a big ask,” Alan says of his friends’ plan to get heroin addict Jack clean in the penultimate episode of ‘White Heat’, the BBC 2’s 21st Century rendition of ‘Our Friends in the North’, so epically broadcast in the 1990s.

Turns out it was. Both for the characters struggling to get the obnoxious Jack out of his habit and for the producers of White Heat themselves. In 1982, no one ever uttered the phrase “a big ask”. I know, I was there, unfortunately. If you had said that to someone then they’d have misheard and thought you were talking about someone’s backside.

The anachronisms that abounded in White Heat have been the source of some frustration and light-hearted commentary but by-and-large critics have shrugged and let them go. It’s the drama that counts, they have said. This is possibly because the series was so limp in comparison to Our Friends in the North. And most critics making contrasts concerning the two series have been so too.

The 1990s’ programme had the characters develop organically over the decades from the area in which each had grown up in, whereas White Heat’s concept was contrived from the off. Its whole approach was a nod to the politically-correct, a phenomenon originally designed to challenge oppression but has since become the most insidious cause of our pathetically dumb culture there is.

There’s the upper crust revolutionary-cum-viscount, a middle class feminist, a Lancashire wanna-be artist, a Geordie computer geek ahead of his time (a sign White Heat was self-consciously anachronistic), an Asian-Brummie gay medical student, a northern Irish Catholic and a Jamaican over in the UK studying law.

Whatever the year covered in White Heat, with all its varying fashion and hairstyle changes, the camera veers its way towards a constant presence. The real star of White Heat is the goggle box, as 70s icon Harold Steptoe once called it. Or, in other words, the television set.

It’s entirely appropriate in one sense for TV to take centre stage in a drama that transcends the period when television began to dominate cultural life in Britain, as a source of light entertainment, as well as a source of news.  However, at a time when Britain chuckled itself hoarse to the likes of Steptoe and Son, the Likely Lads and Porridge, White heat ignores these completely and TV in all its glory then is lost on the series, even though the set is on constantly, because it’s the only reminder of the year we are in most of the time.

Our Friends in the North charts the lives of four people from Newcastle from the mid-60s to the mid-90s. They are all white and working class and have known one another from childhood, more or less. The intensity of their emotions towards one another is instinctively believable as a result. This is not something we can say with White Heat. 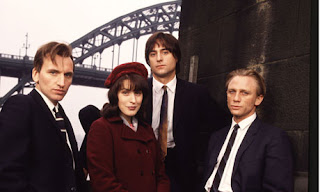 The 1990s series does actually address the longer-term events better, such as the crippling building projects in the north east and the travails of the met’s ‘dirty squad’ down south, than it does its treatment of the miners’ strike, which is disappointingly contrived. But White Heat doesn’t even approach this level of success.


The 1982 episode was particularly bad and inconsistent. Lots of coverage of the Falklands War blaring away from a television screen, not unusually, but aside from Charlotte (now seemingly a TV editor) barking orders for underlings to follow, the only direct engagement with the event was of her ‘disturbed’ mother bantering on about it. Then, the only reference to Greenham Common was of the woman getting lost in it. It was a poor return on a series that began with an elevated view of itself as a feminist alternative to Our Friends in the North, where the main characters were men.

The denouement appears to vindicate the programme, however, in sanctifying Orla, the Irish Catholic woman, who we learn was the one who kept the rest going all the years.

That’s when the pigeon-holing, politically correct aspect of White Heat comes severely unstuck. The fat, northern Irish Catholic of the group of friends becomes the martyr. The middle/upper class remnants remain alive and happy. It’s a complacently duplicitous scenario, particularly as what happens with Charlotte and Victor at the end is almost a replica of that between Nicky and Mary in the final scenes of Our Friends in the North.

More profound is Geordie’s (played by Daniel Craig) walking across the Tyne Bridge with Oasis’ ‘Look Back in Anger’ playing. There’s no sentimental hugging there. More’s the pity, you might say. If one character needed a hug, out of them all in both series, it was certainly Geordie.
Posted by Unknown at 19:15