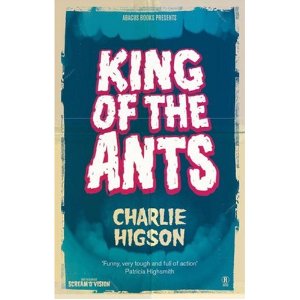 At some point in the ‘90s, I was on the guest list for a press screening of Robert Benton’s crime drama, Twilight. The screening was in Mr Young’s Preview Theatre in the heart of London’s Soho.

It was a dangerous thing to invite me to; there was free food and drink. But there you go!

Various press types were there, including an American with a grating voice and the great Kim Newman - who was being as witty and funny and clever as you’d want.

Just before the film was due to start, a figure in a shabby raincoat and carrying a rattling, clinking plastic bag turned up.

It was Charlie Higson, who at the time was film critic for Red Magazine. Higson sat behind me during the film and, it seemed to my booze sensitive ears, worked his way through a fair number of the bottles of beer that were in the carrier bag.

Higson, at that time, was best known as one of the stars and writers of The Fast Show – a brilliantly funny and bitter-sweet comedy sketch show that has been much imitated and never bettered. Now, he is probably best known as the author of the hugely successful Young James Bond YA books.

But he is also the writer of a bunch of dark and funny urban crime/ horror novels that led him to be described as “The missing link between Dick Emery and Bret Easton Ellis”.
King Of The Ants, his 1992 début novel, is the story of Sean, a pretty useless builder’s labourer, who covets the rich peoples’ homes that he works on and is offered a dodgy surveillance job which then turns into a contract kill. And worse.

King Of the Ants was praised by the great Patricia Highsmith, no less, and the praise is deserved. It is a classic piece of Brit Grit noir, full of bitterness, resentment and underachievement. And humour.

This was followed by more cracking books, including The Full Whack, the cruel and hilarious story of a former football hooligan who is trying to sort his life out when he encounters a couple of blasts from the past that are positively seismic.

Charlie Higson will probably be up for an OBE or something soon but don’t worry ‘bout the rocks that he’s got - Charlie Higson has TRUE BRIT GRIT.

Paul D. Brazill was born in England and now lives in Poland. He left school at sixteen, played bass guitar in a couple of early '80s post-punk bands and once saw Bert Kwouk very, very drunk.

He started writing flash fiction & short stories at the end of 2008 and has had them published in various magazines and anthologies, including The Mammoth Book Of Best British Crime 8.

He has since had two collections published -13 Shots Of Noir (Untreed Reads) & Snapshots (Pulp Metal Fiction). Pulp Press will be publishing his novella Guns Of Brixton soon and he has put together two anthologies, True Brit Grit, published by Guilty Conscience, and Drunk On The Moon, published by Dark Valentine Press. His blog is You Would Say That Wouldn’t You?