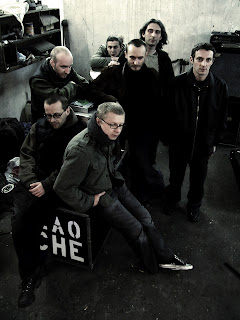 Lao Che, the band that brought rock and roll to the library with its first two albums, has lightened up. With Gusła (‘Witchcraft’) in 2002, and Powstanie Warszawskie (‘Warsaw Uprising’) in 2005 the group broke the mould with their painstaking research into crucial periods of Polish history. With the debut record a study of life in medieval times and the second a raucous tribute to the young fighters who lost their lives battling against the Nazis on Warsaw’s streets during the Second World War, Lao Che proved that the cerebral and visceral could be entwined in a powerful, ground-breaking manner in the studio.

But now, after the huge success of the second album – hailed by many critics as a seminal work in Polish music history – the band have decided to re-invent themselves. The dusty tomes have been cast aside and instead they have reached immediately for their instruments to see what comes out. When they play at Warsaw’s Proxima club on April 15th, they will be showcasing around four new songs, each of which will represent a significant departure from the old Lao Che sound, which while fascinating, was at times held down by the weight of its own intellect.

“We feel that to produce a third album based on historical events would be boring and a bit of a cliché,” said Mariusz Denst, the group’s drummer. “This time no topic was figured out before we created the music. We have done things completely at ease, by just sitting around and discussing our ideas and choosing the ones we feel are the most appealing.”

The only catch could be that this next record is so radically distinct from the previous two that some fans might struggle to recognize who is playing the songs. With Gusła, the tone was one that evoked images of agrarian filth, violence and the bleakest debauchery. With Powstanie Warszawskie, we received a right old earful of the rage that the Varsovian insurgents unleashed against their Nazi oppressors. Neither album contained much that erred on the brighter side of life and, in truth, they were better for it. But now, it seems, Lao Che have gone all chirpy on us.

“Probably it will be quite difficult for people to realize that it is Lao Che who are playing when they first hear the songs,” said Denst. “The first two albums were quite mood-oriented and a bit somber. So we have turned everything upside down and done something very happy and full of positive feelings. There is a lot of humour in the songs. The melodies and arrangements sound like something from the circus and there are also a number of jazz influences.”

How comfortably these new tracks will play alongside the older songs will be intriguing to find out and the only way to so will be to catch the band live, as none of the songs will be downloadable any day soon.

But whatever they sound like, to depart from the successful and extremely daring recipe of the ‘Powstanie Warszawskie’ album just goes to show what a brave group Lao Che are. In the eight years they have been together they have only released two records, such is the rigour they have applied to reading up on their subject matter. It is difficult to imagine a band in the West having any such nerve, and just as mind-boggling that a record company has been prepared to take them on.

So that we don’t grow complacent, however, the group say that the abundant cheer on the next album should not be misread as a sign of intention over the longer-term.

“This third album has been dictated by the reception of the Warsaw Uprising album. However, this does not mean we will be sticking to the same course from here on in,” said Denst.
Posted by Unknown at 12:51