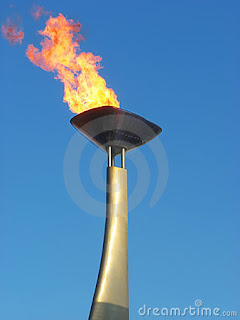 The country is in the grip of hysteria surrounding the Olympics and this is being whipped up during the travels of the flame. Since arriving in Cornwall on the May 18th, people from the communities along the route have turned out to wave Union Jacks, scream, jump for joy and generally behave like morons at the sight of persons, clad in white, carrying aloft a brass-coloured flaming torch. Well, okay, it’s not always flaming – it’s extinguished frequently by the elements or gremlins or some such phenomenon. But do not fear; the torch never leaves home without backup, it is soon relit and continues on its way, uphill and down dale, across the merry shires of this green and pleasant land.

I wonder if the people who line the route are aware that touring the Olympic Flame was introduced (in the modern Olympics) by the Nazis for the 1936 games in Berlin. I wonder if, being aware, the knowledge is in any way unsettling; if they gave a toss.

‘Ordinary people’ and celebrities have been privileged with carrying the flame. When it arrived in Taunton the rapper, will.i.am, assured a television interviewer that such goings on had been a significant part of his childhood [he grew up in Los Angeles] and that he had always wanted to be part of it.  Should I have been surprised that an African-American was not only not freaked out by the image of people dressed in white, carrying flaming torches, but wanted to join them? Normally I would say yes, but hey, in the mad frenzy that is Olympic mania all I can say is, whatever lights your torch!

At this point I think it meet to confess that I am not a great fan of the Olympics. To be frank, I abhor the madness of sport. After long and careful consideration I have come to the conclusion that my attitude towards the competitive was born of the fact that I was the fourth child of a family of eight. Consequently, for the first ten years of my life I never won anything – not even a game of Snakes and Ladders. In the absence of more worthy opponents (their friends) my two older brothers forced my sister and I into an unhappy quartet where they chose the board games, the card games, the sports and, time after time, beat us so comprehensively that they inflicted, in my case, deep psychological damage.  I could, of course, have inflicted the same pain and humiliation on my younger siblings, but by the time the realisation of this possibility dawned, I had claimed the moral high ground and had embraced the idea that all competitive pursuit, with its attendant manic and addictive behaviour, was for the intellectually challenged. Yes, I was a rather precocious child, or to put it another way, a bit of a freak. Unlike most children who were considered normal, I loved doing exams. I adored the quiet and privacy of the written exam. Away from the shouting, hectoring and sneering of my brothers, alone with a blank sheet, a pen and the question paper, I had time to relax, to think, to consider, to give myself up to the challenge of the task in hand.  Happy days for a geeky kid!

Back to the progress of the Olympic Flame. The Olympic Committee, headed by Lord Coe sold the idea of touring the flame as a way in which the entire nation, regardless of income could participate in the Olympic Games. Isn’t that nice? The cynics who thought that the Olympics were only for the toffs who could afford to travel to London and pay the (usually) exorbitant entrance fees, have been shamed.  Without exception, the people of the towns and villages along the route have fallen for the myth of participation and have flocked to join in the party.

The burning question is why?

Why in the name of all that is sane and rational should the citizens of a country, brought to the brink of economic ruin by its politicians and bankers and whose jobs, homes and essential services are under threat because of the austerity package foisted on them by the Con/Dem[olition] squad, allow themselves to become part of this expensive, ludicrous circus?  Have we lost all sense of reality? Have our priorities become so tarnished by a celebrity culture which glorifies the superficial and trivial, that we are willing to lend ourselves to displays of such mindless banality without a blush of embarrassment?

The crowds of ecstatic spectators along the route would lead us to the unhappy conclusion that, for the time being, a sizeable proportion of the people of Britain is willing to be distracted from the misery that has befallen many and which awaits many more, at least while the sun shines. Those who are not so easily distracted can only look on in wonderment and trepidation. How, if so many are so easily mollified will we force our politicians to abandon the policies which will destroy the NHS, schooling, essential services and benefits for all vulnerable people? The government will be happy that there is a summer choc-a-bloc with sport ahead which will keep the millions distracted. But when the summer ends and the recession continues to bite there will be a reckoning. The cheering multitudes might do well to remember Shakespeare’s words as he warns,

“These violent delights have violent ends
And in their triumph die, like fire and powder
Which, as they kiss, consume.”

Mary Rochford was born and grew up in Dublin. She has spent most of her adult life in Birmingham, England, where she read English and History at the University of Birmingham. She obtained a Masters in Literary Studies at Birmingham City University and has worked as a lecturer in further education. Her collection of short stories, Gilded Shadows, was long-listed for the Frank O'Connor International Short Story Award and won the Birmingham City Library Readers' Book for Birmingham Award.