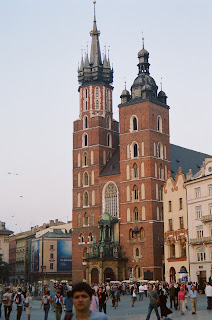 Krakow: Hostage to the Stag-Lads

Krakow – the jewel in Poland’s urban crown - has lost its innocence and let there be no mistake about it. The city, so romanticised by anyone yearning for a weekend away to chill out, sip drinks in and around the tiny bars and stroll about admiring the historical splendour, has almost become just another of Europe’s new cluster of theme parks as conceived by the budget airlines.

Most nations play host to two cities which see one another as rivals and whose temperaments are perceived as clashing, and often this cultural battle plays a large part in defining the country’s character as a whole. Think New York and Los Angeles, St. Petersburg and Moscow, Barcelona and Madrid. And so it is with Warsaw and Krakow, but the contrasts between the two – so vital to providing wholesome leisurely debate about the relative merits of either – are slowly being eroded by Krakow’s growing and, ultimately debilitating, reputation as the pub crawl centre of Europe.

Nobody likes to crawl around pubs more than me, and I certainly did it on my most recent trip to Krakow. It is very difficult to knock a place where you can stroll into just about any bar or club, via a cursory once-over from the door staff, order a beer for PLN 6 and then go and mingle, or at least try to. The differences between that experience and any on offer in Warsaw are clear. The face control beasts have yet to set up shop in Krakow, and long may it continue, but there is very little that is noble in this apparently democratic sentiment. All are welcome into the city’s subterranean drinking establishments, just as long as they spend their money, which is fair enough, but once you have been into one bar or club in the Old Town Square, you feel as if you have been to them all. No-one seems keen on establishing a niche offering anything that little bit different than a chance to indulge in a multi-vodka piss-up.

Of course the leading culprit in all this is the British stag night, which has pretty much laid the Czech Republic capital Prague to consumerist ruin in a matter of years. A night in Krakow makes you realise the lads are hell-bent on doing the same there as well.

It isn’t that they are troublemakers it’s just that they have become such a dull and accepted part of the landscape. Take any Old Town Square dancefloor at, say, 2am in the morning. The scene invariably consists of two pairs of Polish girls strutting their stuff, when a group of four British blokes meanders onto the tiles, and begins to indulge in a collectively clumsy attempt to advertise their supposed sexual prowess. Laughs and giggles are normally the response, yet the girls seem to find them intriguing just the same, even though, or perhaps because, they are all wearing mocked-up Polish football shirts, and the name “Bestmanski”  is brandished on the back of one of them.

A weekend in Krakow coupled with reports of Polish immigrants’ behaviour in the UK has lead me to conclude that maybe the Polish and British governments have hatched a deal of some sort. I imagine something like this, with the Polish side making the initial proposition:

“If you let our bus drivers, from let’s say Bialystok, come over and reap havoc on your roads, then we will allow countless numbers of your countrymen, from towns such as Hartlepool, to come and besmirch our once noble tourist attractions.”
Which is what EU membership is all about, I suppose.

Yet Krakow still oozes charm, though I am surprised the city has not tried to sell that per portion either. My pub crawl ended outside a supermarket at dawn with two Polish blokes and a couple of Germans, with whom I made great conversation, which was interspersed with forays into the shop for another beer. It was nice to know that street-level conviviality did not necessarily have to lead to a spell in the drunk tank, I thought, unlike in Warsaw. But that was until we watched in amazement as the police wrestled a local ‘drunk’ into their car, when they could quite easily have chosen any, if not all, of us. The besuited German businessmen most probably acted as the main deterrent, rather than the Polish students or British journalist.

However, the highlight of that night was when I was alone walking back to the hotel. I was passing through the Old Town square and immediately noticed that apart from some municipal workers sweeping up, I was the only person there. A mist hung over the city and I at once recognised the stunning place I first visited 14 years earlier.

Empty, Krakow beats all in its beauty. The silence, despite the scraping of brooms, lent the Old Town an imposing aura that had been lost amid the insane throng of visitors some hours earlier. Then, a smog of people enveloped the town, but now, despite the mist, all seemed very clear.

The Town Hall Tower - the top part of which was hidden by an early morning fog - mated with the wafts of inebriation in my skull and sundered steps over the cobblestones, to reign over a serenity so powerful, you felt the tourists and their stag night half-cousins would never dare step foot in the place again.

And then, only six hours later, dodging the bodies and licking at my big, tall anti-hangover ice-cream, they were all back again. Thousands of them: riding on horse carts, zipping around on rickshaws and staggering about drunk in identical t-shirts. Just don’t tell me that Krakow hasn’t changed.