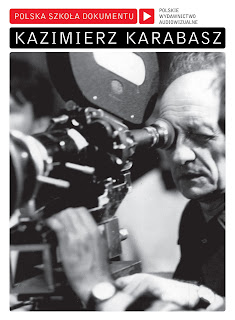 The documentary films of Kazimierz Karabasz, as seen today in the context of no holds barred capitalism, are often hard work. The gentle, melancholic music that frequently prefaces the films often feels far too plaintive an introduction to what, after all, are claims on one’s precious leisure time. And then there is his preoccupation with photography, which in this age of kinetic fetishism looks like an outlandish Luddite indulgence, at least at first glance.

Learning that Karabasz – now 76 years of age – was mentor to the vastly more famous Krzysztof Kieslowski, as well as a number of other Polish film makers, may come as a surprise to anyone watching his work for the first time. For as with his disciple, Kieslowski, not so long ago, a collection of Karabasz’s documentaries have just been released on DVD, accompanied by English subtitles.

The first temptation would seem to be to regard the collection as a history lesson into the life and times of the Communist period, rather than films that stand on their own timeless merits. Unlike Kieslowski, Karabasz was ostensibly less concerned to transcend the here and now to speak to generations in a future he could never have foreseen. Indeed, some of the documentaries, such as ‘On the Threshold (1965)’, seem horribly stilted by today’s standards of uninhibited informality. Introduced by an overly earnest narrator, we are told that the purpose of the film is to examine the hopes and dreams of young women about to graduate from college. Yet their coyness, coupled with the stiff methodology of the film-making, brings us no nearer to what makes them tick, and all we’re left with is a profound sense of relief that the world has moved on since then.

Others are as much steeped in an ordinariness which again can be quite frustrating, but are accompanied by a sense of disquiet that forces you to keep watching. ‘A Year in the Life of Franek W. (1967)’, for instance, is a study of a young man working for the Voluntary Labour Corps in Silesia in the mid-1960s. Chosen for his almost spectacular lack of charisma, the subject, Franek W., inadvertently became a revolutionary symbol for Polish documentary film-making, which had hitherto stipulated that only the group, and not the individual, was appropriate material. On their own, people could not be expected to behave naturally in front of a camera, it was held.

It is a testimony to the vastly different universes that we and Franek W. occupy that he conducted himself with such an unbelievable lack of self-consciousness. These days pointing a camera at someone usually adds a layer to their character, which is frequently very annoying. But watching Franek W. go about the humiliations of his day without an ounce of the opportunism we associate with being on film is quite simply mind-blowing.

For Karabasz, poise and perspective are of the essence. Given the technical limitations at the time of most of his work, this is hardly surprising. You could hardly dash about capturing the hustle and bustle of daily life when you had a ton of equipment to lug around with you. But then, as he proved, you didn’t need to hurry anyway. Place the camera on a roof and let the world scurry around down below, or even, just use photographs. One of the more haunting entries on the DVD is ‘Portrait in a Drop of Water’, one of the most modern of his films as it was made in 1997, yet one that keeps faith to an unpretentious ethos spanning five decades.

A film made up simply of a slide-show of photographs with the voices of ordinary citizens wandering in and out over them, Karabasz’s obsession once again comes pouring through. Let the people speak - of their everyday frustrations, of anything that is on their mind – and simply let the rest of us watch it.