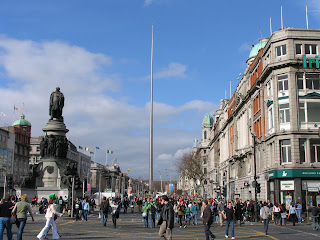 Dublin has always been one of those reassuring cities, like Paris or Krakow, that would always be there waiting for me just as I had left it the last time. That could be because it has always been my most frequently-visited ‘other’ city. Though I was born and bred in Birmingham, both my parents are Dubliners.

But this time round I had had a seven-year break from the place, my longest yet, and what I saw came as a shock. One sure sign of change is scaffolding everywhere and you get to see plenty of it just minutes from the airport. It was in abundance all along the city’s main thoroughfare, O’Connell Street, large chunks of which were being refurbished.

Construction work is a pain, especially when you are visiting a place at your leisure and O’Connell Street has always been my favourite part of the city, despite any need for reassurance, mainly because it is testimony to radical and often violent change. The dust brought on by all the noisy labour forced me to give it a miss for much of the time I was there but there was an addition to the line of monuments that characterise the street, which made you realise that Ireland now has a very different attitude toward its past and how it relates to the present.

I had visions of myself walking up that avenue hand-in-hand with one or other of my parents, craning my neck up at Daniel O’Connell’ statue and being told all about his heroic role in Irish history. Then there was James Larkin, the trade union leader at the time of the 1913 Dublin Lock Out, and Charles Stewart Parnell, the parliamentary nationalist of the late nineteenth century, both of whom my dad would always point at with pride. And then later, there was Anna Livia Plurabelle, the character from James Joyce’s novel Finnegan’s Wake, also clad in stone on O’Connell Street, who was also there to personify the River Liffey, running under O’Connell bridge. A fictional heroine-cum-icon, it would seem. And she wasn’t the only one. Irish imaginations feed off one another. A minute’s walk or so away leads you to Grafton Street where Molly Malone stands, the subject of a mere song, yet plying her cockles and mussels (“Alive, Alive o”) stiffly next to her wheelbarrow.

Yet right smack in the middle of O’Connell Street is an interloper. And no-one in Dublin seems to know what to do with it. Since I was there last time a big needle, calling itself the ‘Millennium Spire’ has been planted in ground that until then had been hallowed turf for the nation’s heroes, real or not.

The sentimental among the Irish, who it has to be said constitute the vast majority, have not had much truck with this spear in the sky, which has played little or no role in rallying the population to the cause of the country.

Literary Dublin (i.e. most of its citizens) has predictably garlanded the ‘spike’ with a wealth of disparaging nicknames, such as the ‘Stiletto in the Ghetto’, the ‘Scud in the Mud’ and the ‘Stiffy by the Liffey’. But this is nothing new. Before she made way for the spike Anna Livia Plurabelle was dubbed the ‘Floozie in the Jacuzzi’ or the ‘Hoor in the Sewer’. Her inventor, the revered James Joyce, still stands at street level with his cane in nearby North Earl Street and has for long been known as the ‘Prick with the Stick’.

This all goes to show that a visit to Dublin brings with it very little in the way of reassurance, however much you may hope for it.

If that rather bland needle on O’Connell Street has lanced the Irish propensity for sentimentality, then so be it, though it is not that clever a symbol in my view. What it does represent, nevertheless, is a country that is far from gazing at its historical navel anymore. It is all upwards from here on in, aside from the beer, might I add.

Take the pubs these days. They all look as they ever did, which is a relief if you have just travelled in from the UK as I had, with all its obnoxious ‘vertical’ drinking and ear-bursting ‘fun-pubs’. Dublin’s boozers still put conversation first.

The guy handing me my pint of Guinness in one bar looked as if he could have come from Malaysia or thereabouts. In one of the previous places I had been served by someone who appeared Middle Eastern. It was disconcerting. Not because of where they were from, you understand, but because of where they were at that particular time: serving behind a bar. Dublin has become an even more intriguing city since it began saying ‘Cead Mile Failte’ (a hundred thousand welcomes) to foreigners hoping to make a new life for themselves there.

A trip back to Dublin has invariably meant that I imbibe as much of the black stuff that my liver and budget can handle and on previous visits the velvety slide of a mouthful of ‘stout’, as the Dubliners call it, down my throat always came courtesy of the patience and skill of that staunchest of the city’s institutions: the local barman.

In most cities, people serving behind a bar do so as a stop-gap before they move onto better things. But, until very recently, that was never so in Dublin. The barman there had always served an apprenticeship, which meant that when he passed you your pint he would be giving you the consummate drinking experience. You would have ordered that drink some fifteen to twenty minutes before putting it to your lips, the professional opposite ensuring that it had been through at least three stages of being poured and settled before presenting it to you as if some mysterious chalice of nectar.

But Ireland’s rampant economic success has called time on the Dublin born-and-bred barman. The only ones I came across were in the airport bar, a telling observation in itself. Now, overseas students man the taps and although tradition no doubt dictates that they still respect Guinness’s need to be at ease with itself before they deliver it to the customer, the tender loving care afforded to a pint by the Dublin barman is just not in their blood.

Molly Malone’s ‘fair city’ is no more. By that I do not mean you are likely to get ripped off in the place than you were in the past, just that the Irish capital has become one of Europe’s genuinely cosmopolitan cities it what seems like no time at all.

Every time I got on a bus, every time I looked out onto the street, there was a black or brown face. This in a country which not only did not have an empire but was active in opposing one for much of its history.

The Poles have made themselves known, as well, particularly on Grafton Street where the buskers and street artists gather. I spotted a Polish girl about to strike up on her guitar with a “little piece of Polish culture” as her notice on a piece of card stated, until she was interrupted by a passer-by and engaged in the compulsory chat.

Dublin has become a melting pot that O’Connell Street’s statues do no justice to. Time waits for no one, the city has become intangible and I do not feel I understand the place anymore, as I used to in the old days when strolling the streets with my parents and brother, or at other stages of my life. But that may not be a bad thing at all. At the end of the day you don’t travel to be reassured.