Serbia as a Safe Haven for Teachers

My mate, Frank Morris, a teacher from the British International School in Belgrade, had suggested this idea about writing about his colleagues' experiences but initially I rejected it, stupidly, thinking it unnewsworthy.

But when the news items dried up I put it as third on my pitch list to my contact at the TES. He loved the idea and it became a double spread, photos and all. Just goes to show how your 'professional' instincts can be utterly wrong.
Posted by Unknown at 13:45 No comments:

My First Ever Published Piece 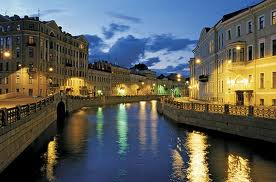 Written in the midst of the chaos of Yeltsin's final days of reign in Russia. I'd perhaps approach the theme slightly differently these days but I am still pleased with the enthusiasm the article projects, at a time when Russia's self-esteem was at an all time low. Say what you want about Putin but that is not quite the case now. 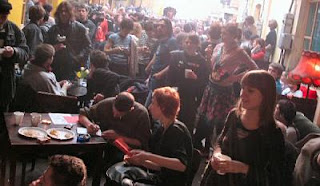 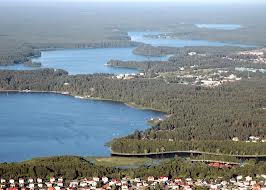 Into the Valley of Strife

The Rospuda Valley in the north-east of Poland is undoubtedly one of the most stunning areas of natural beauty in the whole of Europe where many rare species of bird and plants can be found which simply do not exist elsewhere on the continent. However, it is here that a sometimes-ugly battle has raged between the European Union and ecologist groups on one hand and local residents and the government on the other.

The reason for the conflict is that the government is on the verge of building a road by-pass – as a section of the Via-Baltica highway that will stretch from Helsinki to Poland and beyond - through part of the valley which has been designated by the EU as part of its Natura 2000 network of protected districts, and this is something neither it nor the environmentalist groups can tolerate. In their opinion, the planned road will disrupt the ecological balance of the area irreparably.

Yet the government says it is putting people first, though it insists it neither has any intention of ruining the valley either. It points to the urgent necessity of a by-pass around the town of Augustow, which has been beleaguered by the constant din of trucks passing through it from the Baltic States and Russia since the collapse of Communism led to a huge increase in trade between Europe and the former Soviet Union, which EU enlargement in 2004 did little to abate.

It is fair to say that the views of the EU and the ecologists have dominated coverage of the standoff in the international media, and for not entirely surprising reasons. Whereas they have well-worn PR tools at their disposal, the government – noted for its frequent clumsiness in its dealings with anything foreign - and the locals, more understandably cut-off from big-time media contacts, have struggled to present their case. Until recently, that is.

In early April, the ministry of the environment, which supports the locals’ stance, arranged a visit to the region for members of the international media, among whom were journalists from Japanese, British, Dutch and American news organisations.

I went along as one of the party and did so with the normal scepticism journalists should always take along with themselves on any such an arranged trip.

As we flew over the Rospuda Valley wetlands by helicopter, it was impossible not to be struck by the genuinely unspoiled landscape. On the ground, the sight was even more exquisite.

That the government would want to ruin this exemplar of natural beauty seemed the most heinous of crimes but the town of Augustow feels an even greater one is being perpetrated against it on a daily basis. Being there in person, however, you see that this happens by the second.

On the main road going through the town there is an unremitting stream of juggernauts and the noise has to be heard to be believed; it sends tremors throughout the whole town. Not surprisingly, the residents find it unbearable and they argue that the by-pass would rescue them from a predicament, which frequently involves people being killed in road accidents as well. Mention of the EU and the ecology groups that have thwarted the construction of the new road, is like spitting in their faces. One 85-year-old woman told me that she had moved to the town five years previously from Warsaw to seek a quieter life but now found living there a torment, adding that it was “an utter scandal” that work on the by-pass had not already begun.

“All we want is for the trucks to disappear from the town,” said Bogdan Dejuk, the leader of the Augustow residents’ committee, which is campaigning in favour of the road.

From the other side there is an equally strong case, because it argues that building a road there would create a precedent that Europe becomes just the same anti-environmental terrorist that the USA is often alleged to be. Once this road ploughs through the forest and disperses the wolves, birds and other animals hitherto living there to narrower corners of habitation, the argument goes, what is stop other initiatives turning beauty into the deadly and dull usefulness of concrete?

So the EU/ecologist coalition has devised an alternative road-plan that will go the other longer way round and avoid touching the Rospuda Valley, and the trucks will get to Germany and elsewhere without hurting any rare species of wildlife. But this will in turn collapse most of the villages that exist in its proposed wake into extinction, the government and the locals insist, making it impossible to cultivate the land they have fed themselves by for generations. The vitriol the mostly elderly locals aimed at Brussels during our conversations suggested a vitality they have regained in the light of the departure of so many younger through emigration, and they intend to fight.

The ecologists argue that they are being misled by the government, who have indulged in scare tactics to win their case.

“It is just not true that the alternative road will destroy as many houses as the ministry claims, because the total will only be 30,” said Anna Roggenbuck, of the Polish Green Network. “It is also false to say that people will be cut off from their farms, as the alternative plan includes a juncture that will prevent this from happening.”

In the end, it is difficult to imagine the locals winning, largely because their ideal is ultimately parochial, not universal and this latter perspective is by definition preferred by a body as large as the EU. In the villagers’ view, their families and way of life are under threat, something that is disputed by Brussels, though few, if any, of the bureaucrats have bothered to make the trip to the region to discuss these fears with the people, which goes to show that ‘universal’ can often be seen as high-handed and mean-spirited. On our visit, it was left to young Green activists to put the ecological case, which they did so bravely to the assorted ministers, mayors and other notables on hand and though there was little love lost between them, it was at least a moment – under the gaze of the international press – when both sides began to listen to one another.