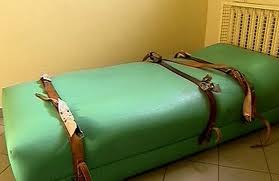 The Big Hangover in Poland

Post-Communist Poland has meant the freedom to party and it is one reason some ex-pats have come to love the place. Being allowed to keep on drinking till six in the morning at a fraction of the cost they would incur back home has arguably encouraged a number of them to stay in Poland for the long haul.

But there is a price to pay for the joys of cheap beer until the early hours. It is called Izba Wytrzezwien (IW). This is where the Wild East and the Iron Curtain meet.

The contrast between the experiences of alcohol-induced enjoyment and a stay in an Izba Wytrzezwien, commonly translated as “sobering-up centre” or “drunk tank”, is traumatic to say the least.  Your weekend night out exists for you to leave the daily grind behind, not see it multiply ten-fold in the form of five other inmates with tattoos and the shakes who are going to be your company for up to twenty-four hours. You can panic and bang on the door for help all you like but all that will lead to is the orderlies rushing in to strap you to the bed. Your night on the tiles has become your worst nightmare.

“We have a liberal attitude toward foreigners,” Ryszard Sniezek, the chairman of the association of sobering up chambers in Poland, told Poland Monthly. “We do not want to cause any unnecessary problems, but if a law has been breached and a person is in a state of drunkenness, then foreigners too can end up in Izba Wytrzezwien.”

Poland Monthly spoke to a number of expats who had spent time in IW.  Most would laugh at the suggestion that they were shown any “liberal attitude” during their time there. Yet those who lead the institution argue that it exists to help people combat their problems with drink.

“You need special places to deal with people if they are unconscious after having too much alcohol,” said Joanna Mikula, director of the State Agency for Alcohol-Related Problems. “Intoxication puts people in danger of their lives and IW exists as somewhere to provide healthcare, but it also serves as a means of containment.”

PM’s sources insisted that they had been locked up in IW for several hours, but only one mentioned receiving anything that approached “healthcare”. Most pour scorn on the suggestion.

Now resident in Warsaw, Piotr recently decided to give up alcohol but prior to this he could claim a track record in drunk tanks across Europe that is almost impressive. His “tour of duty” includes stints in Sweden (“the worst of all”, he insists), Amsterdam (“the best”) and London. Warsaw’s IW, on ul. Kolska, was the second least hospitable in his view. He ended up there after a typical night out.

“I was quite drunk but knew exactly where I was going. I met an acquaintance on the way and we had a beer together. Then, suddenly he started throwing up,” said Piotr.

“The police saw us and took us to [IW]. You had to remove your clothes, put on this white shirt and go into a cell with six other guys. Two of these had already started fighting but somehow the rest of us managed to put a stop to it.”

As the biggest “sobering up” centre in Poland, the IW in Warsaw has places for 130 people, “whose behaviour gives rise to outrage in a public place or at a place of work, [and] who remain under circumstances that endanger [their] life or health.”

Those are the reasons given in Article 40 of the Act of 26 October 1982 On Upbringing in Sobriety and Counteracting Alcoholism for locking someone up in the institution. There have been several amendments to both Article and Act since then and those responsible for the running of IWs stress that they are more concerned with assisting than punishing people who have abused alcohol.

“[IWs] are modern institutions which are well-equipped and professionally-maintained for the care of patients,” claimed Ryszard Sniezek.

Until 1996 these “patients” could be stripped naked and hosed with cold water in a crude effort to sober them up. A visit by the European Committee for the Prevention of Torture and Inhuman or Degrading Treatment (CPT) in 1996 put a stop to this practice and when the committee visited Poland once more in 2000 it reported itself largely satisfied with the reforms that had taken place.

Yet of the people PM spoke to only Piotr suggested that the IW regime had acted in any kind of supportive manner.

When he was freed to collect his belongings he was obliged to see a counsellor, though after a “seven-hour wait stuck in a small room with 20 or 30 other guys with the sun shining through the windows,” he said.

“You had to sit down with a psychologist and talk about your problems with alcohol,” Piotr went on. “She asked me about my drinking habits and also told me about where I could seek help.”

Eric, an ex-pat English teacher, found himself locked up in IW with three of his friends who were over on a short break from the UK to Warsaw. The limited concern the IW staff had shown toward Piotr had become a thing of the past if their story is to be believed.

“We went to an Irish pub, had a few vodkas and beers and got a bit tipsy,” said Eric.

“The next thing I remember is sitting in a taxi with two of my mates waiting for the last one to come out. We looked out of the window and saw him fighting in the street, so we went and tried to pull them apart.”

“Suddenly, there were blue lights everywhere and we got thrown into the back of a van,” he went on.
After a trip to a police station, the four were driven to the IW.

“As soon as we arrived [in the compound of the IW] and they opened the doors, Alex [the one who had been fighting] started to run away. You had this comical scene where he was almost being chased around in circles by the police. One policeman grabbed my mate, who then pushed him away. Then the copper punched him in the face.”

The four were dragged into the building where they were breathalysed and told to fill out some forms. They were then separated and taken to different cells.

“I was brought to a cell for six people where there were already three old guys,” said Eric. “While they didn’t smell too great they didn’t look too dangerous either.”

After briefly falling asleep and waking up thirsty, Eric was allowed out to drink some water. It was then that things took an inexplicable turn.

“I was taken to another cell with six beds but this time there were around twenty-two people in it,” he said. “I had to sit on the floor. The smell was unbearable, a combination of urine, body odour and beer.”

This part of Eric’s story suggests that however the regime at the IW has changed in recent years, it is some way off treating the basic comfort of its ‘patients’ as a priority.

“Among this group of people were a couple you could only describe as grade-A psychopaths,” said Eric. “One guy, who was pacing from one end of the cell to the other, had the tattoo ‘Prison’ on his lower leg.”

The orderlies then opened the doors to admit another ‘patient’. It was Eric’s friend Alex.

“His face was full of bruises,” said Eric. “He had been dragged off to a cell, still resisting arrest, got strapped down to a bed and was given a few digs with a baton. They had obviously had no qualms about leaving any marks.”

Something similar happened to Rory Dwyer, another English teacher in Warsaw. He insists he was less drunk than simply going through a bad patch in his life.

“A lot had gone wrong that week and I didn’t need any more problems,” Rory said. “I had only had a couple of beers and then, while I was walking back home, I got a call from someone who was working for this new business I had created in Ireland who told me she was being sent home [back to Poland]. So I swore and threw my phone down. This got me arrested by the Warsaw City Guards.”

The guards brought Rory to the police station at Rondo Babka, where he found himself in the company of fifty other people, who had been apprehended for various reasons. That was when a bad week went very sour.

“There was an old guy drunk and muttering to himself, who got up and started wandering about the place. This big copper came over and slapped him over the top of the head,” said Rory. “And I said [in English] ”you’re a big guy, you’re a very hard man”. I could have talked myself out of it but i didn’t.”
So Rory bought himself a visit to the IW.

“I was processed, they took my clothes and put me in this room [a cell]. I knocked on the door. The next thing one of the orderlies came in and punched me in the face and I was standing there trying to take it all in when four guys rushed in to tie me to the bed. They then ordered in a nurse to give me a horse tranquilizer."

Though the authorities want the IW institution to be perceived as a place where those dependent on alcohol are given a second chance in life, Rory, even now, remains extremely bitter at the way he insists he was manhandled.

“I am just glad that I was strong enough to deal with it, because it could push other people over the edge,” he said. “It is an outrage what happens in those places. What I went through was tantamount to rape.”

This piece can be read alongside another, more personal account of the Polish drunk tank experience that was published in the Independent on Sunday later in November 2005, as well as an archive article I posted earlier on this blogspot, which appeared in another Warsaw-based English language magazine in 2007 and shows how the 'drunk tank' regime was changing.
Posted by Unknown at 06:26 No comments:

Killing Mr. Cornflakes is a new flash fiction offering from Paul Brazill, my mate, and one-time guest contributor to this blogspot. My flash review: "A neatly-entwined three-part narrative, with all the usual bleak humour of Mr. B! Don't read over breakfast, mind..."
Posted by Unknown at 09:33 No comments: