Archive Article: Nasty Habits: Hybrid Band Gets in Your Face 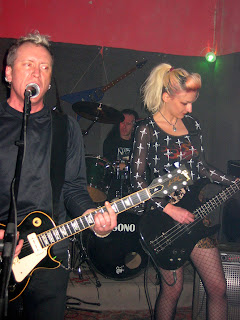 Nasty Habits: Hybrid Band Gets in Your Face

According to the Polish-American-Brit trio of Ewa Koc, Danie Stewart and Michael Caine, the journalistic custom of pigeonholing bands is one of the profession’s more unpleasant traits. Of course, the fact that the three have combined together in the first place, to bang out their repertoire of boisterous tracks, is a slippery enough notion in itself for the average hack. ‘The ex-pat rock band’, with a dash of local talent thrown in, is not something you get to write about every day.

“I hate labelling bands because all it does is create restrictions,” says Caine, the Durham-born drummer of the Nasty Habits, a group formed because one day it dawned on two English teachers that the routine of giving lessons, interspersed by sessions in the pub, was proving too drab for comfort. Both Caine and Stewart – the group’s lead vocalist and guitarist - knowing that the other was a fellow musician, decided that enough was enough and that the time had come to start playing, with the proviso that they hired a female bassist.

“It was a conscious decision on our part, mainly because a lot of male, Polish musicians are a bit non-visual,” says Caine.  And we thought, let’s get someone in with a bit of attitude.”

Back from a stint in Germany, the psychobilly-influenced Koc teamed up with the Brit and American, whose respective musical tastes can loosely be described as Goth and Punk, after Stewart’s incessant phone calls finally persuaded her to join up.

“I think I harassed her for about three months, before she called me back wondering who this strange American guy was,” he says.

Though each band member shares a background in the more raucous musical genres, Koc initially recoiled at Stewart’s overtures.

“At first when Danny called, I said, “What is it, a psychobilly band?” and when he replied “No, Punk,” I said “Forget it,”” she recalls.

Yet it was precisely that type of response that appealed to the group’s founders.

“She has got a lot more balls than other people and that is what we were after,” says Stewart.

Whilst feistiness may have been high up on the list of requirements to join the band, so was compromise.

At first listen the Nasty Habits seem exclusively to be lyric-writer Danny Stewart’s creation, with his meaty guitar chords at times overriding the other band members’ contributions. As well as a devotion to The Clash, one of the tastier revelations our interview threw up is that he has an affection for the ultra-Cockney group Sham 69.

How a song, such as ‘Hurry up Harry [We’re Going Down the Pub]’, penned by the that band, managed to make the trip over the pond to San Francisco is one of life’s many mysteries, though on a couple of tracks on Nasty Habits’ CD Stewart sounds as if rhyming slang and pie and mash are in his bloodstream.

Perhaps that is the key to the Nasty Habits. Within the lead singer and guitarist myriad voices abound already, before the group even meet up for rehearsal. And then, when they get together, despite Stewart’s ostensible domination, the morbid backdrop of Caine’s Goth influence, coupled with the irresistible twang of Koc’s bass, which you can almost taste in your mouth, blast in unison right in your face.

Being angry is what punk is all about, but you may wonder at the source of the gripe when listening to the Nasty Habits. What are they pissed off about? You might well ask. Being English teachers and a returnee from Germany are not the worst predicaments to affect people in this day and age. But then there is drudgery and boredom, possibly the worst habits of all. Answer? Go form a band.