Panorama and EURO 2012 - Careful With that ‘Racist’ Tag 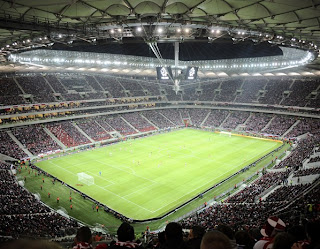 Careful With that ‘Racist’ Tag

When you dub whole nations as racist you yourself are being racist, a point that has been long overdue in the making since the broadcasting of Panorama on Monday (May 28th 2012), which depicted scenes of violence by Ukrainian football fans against one another and a group of young Asian men at the Metalist Kharkiv stadium earlier this year.

The former Tottenham, Arsenal and England centre back, Sol Campbell, sailed close to the wind in relation to this particular conundrum but also highlighted the fact that a number of people in the UK do harbour prejudices against citizens from the former Iron Curtain. (Note that I am not accusing all British people of this attitude and neither would I discourage Eastern European friends from visiting Britain because they might be attacked). Why Campbell was deemed an authority on football and race matters in Eastern Europe by the Panorama producers is another matter I would like to know more about.

I spent well over a decade living in this very region: Russia, Poland and Serbia being the countries I took up residency in and in the main felt safer there than I often have in the UK. I have also been to plenty of football matches in all three countries and each time came away unscathed, despite speaking English in front of the local supporters and once being right in among Legia Warszawa’s ultras, though my tones might have been more hushed on that occasion. While not denying that racist chanting does happen, I heard very little of it while attending games hosted by Zenit St Petersburg, Legia Warszawa, Polonia Warszawa and Partizan Belgrade. True, I have seen violence and on one occasion it was pretty extreme but it was directed mainly against the police after Legia Warszawa won the Ekstraklasa (Polish Premier League title) in 2006. And those ‘fans’ taking on the intimidating presence of the Polish riot police embarked on a brave undertaking indeed. Water cannon, batons as long as walking sticks and a group of officers with a licence to strike, you’d have had to be really up for it to confront those Robocop clones. That might have been an issue worth addressing by the Panorama team for the benefit of English fans travelling to EURO 2012.

Black people and those of other non-white races do live in Eastern Europe and some have done so for a long time. Some of them are footballers and other athletes too. Few leave in coffins, Sol Campbell should note.

I have never lived in Ukraine but have visited the country twice. The first time I went, I almost did make my return journey in a wooden overcoat but that was because a taxi I was in hit a patch of ice and the car nearly went belly-up, not a scenario that need trouble English football fans out there in June. The second occasion was in Odesa, also during the winter months. I ended up in a huge, Soviet-era hotel with only a smattering of guests in its innumerable rooms. One, like me, was a lone traveller and we hooked up. He was a black American soldier on R&R from Iraq. Yes, he did attract looks but never any aggression. The worst that could be said of the locals’ reaction was that it was patronisingly friendly.

Overzealous hospitality is certainly something English football fans can expect over in Poland and Ukraine. Trying to extricate yourself from yet another round of vodka shots is often nigh on impossible in these countries and the irony is that some of the hooligans might even be the most welcoming. The Panorama footage showed a Ukrainian fan wearing a flag of St George smock, to which little or no reference has been made. Guess which country has been the main inspiration behind the football thugs’ rise in former Communist Europe? England, of course. For its fans to now be scared of venturing in amongst people it helped influence is irony indeed.

If the Panorama programme has proved anything it is that the concept of racism has in some ways been turned on its head with the football tournament approaching. Those from a multi-ethnic society are afraid, ignorantly afraid, of going to countries which they perceive as mono-ethnic. Given the scenes depicted by the BBC there is, clearly, some basis for the fears but the broadcaster was also failing to acknowledge a universal fact. All societies, by their very nature, are diverse.
Posted by Unknown at 10:21