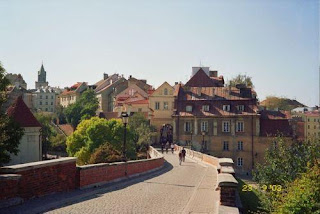 Lublin – 170 kilometers to the East of Warsaw and Poland’s ninth largest city, with a population of 400,000 – has been getting a raw deal of late. All but ignored by most standard travel guides and ignominiously labeled as the city with the lowest GDP in the whole of the European Union, the place would appear to be in need of a lift. While foreign investors are falling over themselves in western parts of the country, Lublin is hardly getting a look-in.

But all this could well be to its advantage, especially as far as the casual visitor is concerned. Forget about Krakow, Gdansk and Wroclaw, for a moment – with those vast pilgrimages of tourists nudging and barging their way past you. If you care for historical charm, a gentler variant of civic pride and the chance to plod around with all your holiday nerves intact, then Lublin’s the place.

Most of this, to be fair, is to be found in the city’s Old Town, which is among the smallest as they go in Poland. On one side it is almost immediately curtained by a sprawl of tower blocks; unusually for old towns in Poland these come up way too close. On the other, the narrow cobbled streets of the medieval quarter give way to Krakowskie Przedmiescie, the city’s main thoroughfare, which is the commercial heart of the city but also brims with its own noble, Renaissance architecture. Though the crumbling facades of the Old Town look poorer in comparison, it is to these that the tourist is inextricably drawn back to, perhaps after a ten minute meander down the avenue, your halting point being the grand statue of Marshal Pilsudski.

Lublin’s Old Town is irresistible precisely because it seems to be falling apart. Perhaps the unconscious urge in dashing back from Krakowskie Przedmiescie is to see as much of it as you can before it collapses into a heap. The other is that in their dilapidation the buildings ooze their history much more powerfully. The tourist industry demands that sooner or later Lublin’s Old Town will be spruced up – via an uglifying period of renovation, no doubt – but without its blemishes it will become just another postcard.

That’s from one who neither works nor lives there, however, and was punctuating short periods of his sauntering around, with long-term lounging in the bars, cafes and restaurants that lurk in every crevice. Though if you do manage to ignore the fraying of the brickwork – from the vantage point of an alfresco seat, beer in hand - what you will see is a multi-coloured collage, from one flawed beauty of a building to the next, which is a treat to the eyes.

Lublin Old Town is also a lot easier on the pocket than its more celebrated counterparts elsewhere in the country. The most expensive Zywiec is PLN 6.50 in the Irish Bar, for example. Elsewhere you’ll pay no more than PLN 5.

Perhaps the most pleasant outdoor dining and drinking experience came when we were lazing in the sun at Szeroka 28, the Old Town’s only Jewish restaurant. With that incomparably soothing Klezmer music seeping out of the speakers, we savoured every mouthful of our meal – garnished by a huge slice of orange and Mediterranean salad - and accompanied by a glass of excellent Israeli wine. Though we were only in Lublin for just over 24 hours, those moments were the ones most memorably soaked in leisure.

Lublin’s Jewish past does not get the attention Krakow’s does but is rich nonetheless and Szeroka 28 is the most salient attempt in town to keep traditions alive. It puts on frequent concerts and the inside of the place is a glorious clutter of all things precious to Jewish culture. The owners are friendly to a fault too.

In 1921 almost 40 percent of Lublin’s population was Jewish. After the Nazi atrocities of World War II, they were reduced to a mere handful. Much of the city’s tourist revenue indeed comes from Jews visiting the city on heritage tours. But Szeroka 28 is basically their only meeting point in the Old Town.

It is a sad testimony to how mono-ethnic Poland has become, on one hand. On the other, Lublin’s Old Town, as the historical part of Poland’s link to its neighbours further east, is the ideal setting to sample fare from the Ukraine and beyond.

Take Przez Kresy in the Old Town Square, for example. Neat and tidy and tended to by one’s ideal of the sweet Slavonic waitress, you get to sample fare from all around the region at knock-down prices the owners don’t seem to be aware of. This is no milk bar, despite the modest menu. This is a carefully created atmosphere – with samovars on tables and all – that shows that Poland is in many ways is just as ‘Eastern European’ as its neighbours.

Deeper into Poland’s psyche lurks another Lublin gem, it too in the Old Town, yet utterly incongruous. We went in there simply because of the party atmosphere that beckoned us in from the street. It’s called Czarcia Lapa (Devil's Paw), and was full of overweight 50-year olds getting down to several sounds both current and old in rampant fashion. Helped on their way by the usual ‘Communist-man-on-a-keyboard’ they seemed to be having a whale of a time.

Such is the way things are in Lublin. It looks a mess, but that’s just part of the whole fun of being there.
Posted by Unknown at 11:27