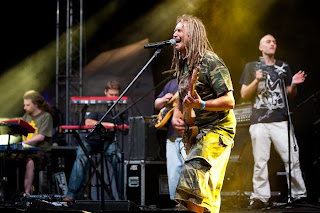 ‘Polish’and ‘Reggae’, the two words do not exactly trip off the tongue when uttered in the same breath. Yet the languid sounds born in Jamaica have a home in this country that has deeper roots than most people might think.

Maleo Reggae Rockers (MRR) are fronted by a veteran of the Polish rock scene who has also been garlanded with a number of awards since he picked up a guitar in 1983. Darek Malejonek, vocalist, songwriter and guitarist of the ten-piece outfit, has been playing and singing with assorted punk, grunge and reggae bands since the days of Communism and he still looks and talks like a man who has fire in his belly. When WiK: English Edition met him he was just back from the Polish ‘Woodstock’ festival and was sporting a scar on his forehead caused when his onstage revelry brought it into heavy contact with his microphone.

Of all the genres of protest music reggae has often been the most curious because it does not rant and rave like others, such as punk for instance. Just as long as you can get past the Jamaican accent the tunes often have you nodding in agreement as well as in rhythm. Maleo Reggae Rockers sing in Polish and, refreshingly, without the cod West Indian vocals that some of their contemporaries adopt. They maintain that their vibe is perfectly consistent with the anti-colonialist stance of traditional reggaeists.

“Poland has a very complicated history,” Malejdonek said. “And when I see what is happening in Lebanon right now I can put myself in the victims’ shoes because of it. When you think of the Warsaw Uprising and all the people who died you can see that there is something in common [between the two situations].”

Interestingly, given his outlook on current affairs, one of Malejdonek’s first bands was called ‘Izrael’, a name he admits would not go down too well in some quarters given events in the Middle East at the moment.

The huge popularity of home-grown reggae bands in Poland is at first glance a major oddity. A country not exactly noted for being a multi-ethnic melting pot – the usual grounds for music from the Caribbean gaining a foothold in a European culture – Poland nonetheless continues to spawn a steady flow of groups who swear by the legacy left by Bob Marley and co. With the apparent boost in confidence currently enjoyed by far-right groups in Poland, the reggae scene can act as a powerful counter-weight in favour of tolerance and internationalism.

But you have to go back to the mid-80s, says Malejonek, in order to come up with an explanation as to why Poland has given birth to so many groups knocking out the booming bass-lines and staccato chords beloved of the dread-locked contingent.

“When we listened to Bob Marley singing about Babylon, slavery and oppression it had strong resonance for us living under the Communist regime,” he said. “Just as with punk, reggae was a popular type of rebel music and a lot of musicians, including myself, played in both types of band at the same time. And now we are seeing another explosion in reggae’s popularity in Poland.”

The grip that hip hop has maintained on the imagination of the nation’s youth has led to some groups dabbling in the recent cross-dressing that genre has indulged in with the reggae-tinged styles of raga and dancehall, Malejonek says.

The upshot of that means Polish reggae has more tempo in its veins than used to be the case, with Maleo Reggae Rockers embracing the new wave as enthusiastically as any. Though some say they can only take reggae in small doses because of its alleged repetitiveness, MRR pump out a sound throbbing with energy and with the gruff vocals of Malejonek leading them can whip up an audience into a frenzy in no time. The spectacle at a MRR gig is unique, with fans waving home-made banners and dancing uninhibitedly, with little attention paid to self-image or rhythm. The ‘cool’ associated with the home of reggae, Jamaica, seems largely absent, but no matter. The passion for the music is clearly insatiable and is why the words ‘Polish’ and ‘Reggae’, in the end, collocate easily.
Posted by Unknown at 17:12