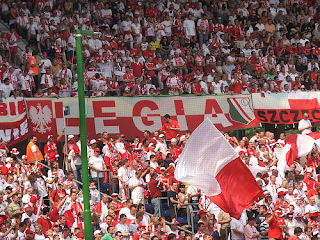 
Just over six years ago, while living and working in Warsaw, I wrote a piece for a local English language magazine about the plight of one of the Polish capital’s most eye-catching features. The ‘Russian Market’ was the name many ex-pats had given to an astonishing gathering of different nationalities in what was, and largely still is, an almost uniformly white, Catholic city and country. The Armenians, Vietnamese, Africans, Middle Eastern and Ukrainian vendors who plied their trade in clothing, CDs, DVDs and occasionally Nazi and Soviet era memorabilia were doing so at the disused national stadium, ‘Stadion Dziesiecioleca’ (the 10th Anniversary stadium), which opened in 1955 (ten years after the Communist regime had come to power in Poland) but had ceased to function as an arena by the 1980s.

It was an incredible sight, all those garment stalls crammed almost on top of one another at the bottom of the stadium, the wares being hawked by the Armenians and Vietnamese. Up at the top above the empty stands, overgrown pitch and forlorn-looking goalposts, young Africans would approach you and try to flog discs with a whisper in your ear as they passed by. The odd Ukrainian could be seen selling SS uniforms and medals, which one told me were perfectly genuine having been seized during World War II when the Nazis were being driven from the USSR.

On Friday June 8th that very site will host the opening match of EURO 2012 between Poland and Greece, with nearly 60,000 people in attendance.

To call the change dramatic is a huge understatement, something the UK media, with its reports of racism at Poland’s football stadia and its own, frankly, prejudiced views on both Polish culture and that of co-host Ukraine has largely failed to acknowledge. The new national stadium has been built according to the highest standards, its design inspired by existing state-of-the-art venues in Western Europe and elsewhere.

It will also be the scene of potentially the most electric match in Group A, when Poland face Russia on June 12th. There is also the irony to consider that the stadium was once referred to as the ‘Russian Market’, though even in 2006, that had ceased to be an accurate label. The visa regime Poland introduced for Russian citizens in 1998 had put a stop to coach loads from cities from all over Russia arriving in the early hours, spilling out traders in their scores to set up stalls at the bazaar. Rumours abounded as to the merchandise on offer at the market, with Kalashnikov rifles among the possible purchases, it was said.

This time round the visitors from the Big Bear will also be coming to be Poland in controversial circumstances. The Russian squad is being accommodated at the Hotel Bristol right in the centre of Warsaw, just down the road from the presidential palace, which has been a magnet for nationalist demonstrators since the plane crash near the Russian city of Smolensk in April 2010. This saw then-president Lech Kaczynski and numerous other luminaries lose their lives, with a significant minority of Poles believing the tragedy was the result of a Moscow-inspired conspiracy. Many of these are set to congregate before the palace to protest just two days before the game between the two neighbours, whose relations have historically been fraught in any case.

As a result, the Polish authorities have suggested that the Russians change hotel to avoid the discomfort that might well be caused by demonstrators cursing their names but the latter have declined the invitation, saying they have faith in their hosts’ ability to safeguard their security.

Yet on match day itself the tension might be ratcheted up another few notches as the Russian national side’s supporters’ club has said it intends marching through Warsaw just before the referee blows his whistle for the game to begin. Some in the Polish capital have expressed concern that their guests might be doing this provocatively, though the visiting fans have reassured them that June 12th is a national holiday in Russia and their coming together on the city’s streets will simply be an attempt to mark the occasion. We shall see, and hope nothing kicks off before kick-off.

In general, EURO 2012 promises to leave an ingrained legacy in Poland once the tournament has come to an end. All the stadia that have either been re-built or constructed anew in time for the championship will be put to full use in the years to come, mostly by local clubs in the Ekstraklasa, with the exception of the venue in Warsaw.

The future looks promising for Polish football, as a result, but though the local fans can be very passionate they are also an anxious lot who tend to downplay their team’s chances as militantly as they support it. Qualifying as hosts and having to play nothing but friendlies for the past two years, they are also an unknown force, pretty much, though the core three Bundesliga-winning Borussia Dortmund players: Lukasz Piszczek, Jakub Blaszczykowski and Robert Lewandowski should make opposing sides sit up and take notice.

Back in 2006, not long after I had traipsed around the ‘Russian Market’, Poland fielded a team at the World Cup in Germany. As with the preceding tournament in 2002, the showing was a failure, mitigated, very slightly, by the fact that two ‘Poles’ - Lukasz Podolski and Miroslav Klose - had appeared in the far more successful German side. Both are in the EURO 2012 squad for Germany, as they were in EURO 2008 when two Podolski goals largely put paid to Poland’s chances of advancement from the group stages. The ‘German’ was evidently emotional after netting against his country of birth. There’ll be more than tears if he does it again.
Posted by Unknown at 07:12