Me on the Crisis in Ukraine 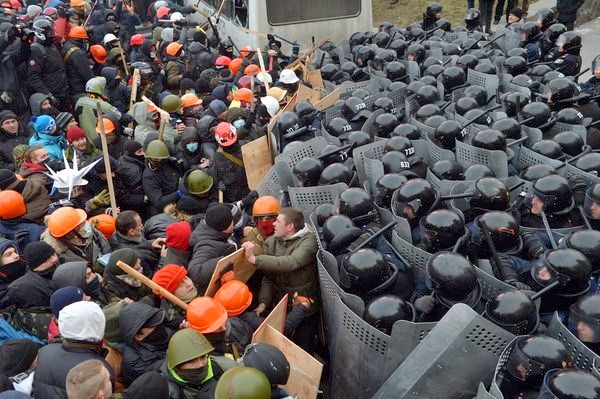 In Ukrainian the country’s capital is spelt Kyiv while in Russian it goes by the name of Kiev, though both languages use the Cyrillic alphabet. Strange then that the Western media, such as the UK’s BBC, choose the latter term to denote the city, despite being clearly in favour of the protestors who played such a major part in deposing former president Viktor Yanukovich recently.

This contradiction may seem superficial but in my view it underpins much of the crisis that has gripped the nation of late.

It has frequently appeared to be a country that has been split down the middle, almost symmetrically, with the people in the West fervently anti-Russian and those in the East equally as pro.

However, the situation, as usual, is more complicated than that. I have been to Ukraine twice, once to the Western city of Lviv and the other time to the Black Sea resort of Odesa.

The first city is supposedly a hotbed of Ukrainian nationalism, while in the second only Russian is spoken. Yet, when I was in Lviv I communicated to hotel receptionists and taxi drivers using a hybrid of Russian and Polish and had no negative reaction whatsoever. The irony was that, despite being so Western-oriented, in Lviv daily routine matters were less easy to manage than turned out to be the case in Odesa. Cash machines, for instance, didn’t work properly, the waiting staff were surlier than in the East and though there had been heavy snowfall, it took ages for the roads to be gritted. It was like travelling back in time a decade.

Then there was another twist, slightly, when I was in Odesa. I chatted regularly and casually with one of the waiters who worked at the massive Soviet-era hotel I was staying at near the Black Sea beach. One night in the bar on the television Russia were playing a qualifying match for EURO 2012, partly to be played in Ukraine. I got talking to him about Andrei Arshavin, the Russian striker, and what a good player he was. He agreed but was adamant that while Arshavin was an excellent footballer, he was Russian, not Ukrainian as was the waiter and this conversation happened in Russian,

In spite of all these complexities, it is clear that Ukraine is close to being torn apart between East and West. It is not as if the matter is unprecedented, however. When Poland’s marshal Pilsudski’s forces marched into Ukraine to confront the Soviet Red Army in 1920 they were initially beaten back until Lenin rashly ordered his forces into Poland itself and was repelled by a national upsurge. It shouldn’t be forgotten, however, that Leon Trotsky, the creator of the Red Army, was firmly against the incursion into Poland, arguing that you cannot export socialism. He was also Ukrainian by birth.

As was Nestor Makhno, who during the Russian civil war set up his own anarchist battalion called the Revolutionary Insurrectionary Army of Ukraine. An anarchist, he took on every participant in the civil war, including the Red Army, proving that the country is one riven by divisions.

That has not changed by all accounts. An impasse has been reached where civil war is not off the cards. The question is who is responsible for the current mess? Some say Russia, others point to Western interference.
As the Moscow-based left-wing campaigner, Boris Kagarlitsky, has often remarked, the apparent architect behind the turmoil, Vladimir Putin, is an opportunistic bureaucrat without any ideological scruples at all.

We can probably place Yanukovich in the same category too, alongside the likes of former Serbian president Slobodan Milosovic. Though of seemingly entrenched opinions, all three have been deeply sensitive to the swaying of public opinion. Two have been felled by this position, it remains to be seen if the third might also be.

Yet the West’s role in this affair is also compromised. In the former Soviet bloc they have stuck their noses into Georgia, in the so-called ‘Rose Revolution’ in 2003, in Ukraine in 2004 and Kyrgyzstan in 2010. As with all these with all these high-profile confrontations, words from either London, Washington or Berlin are likely to prove of no help at all.
Posted by Unknown at 05:10 No comments: