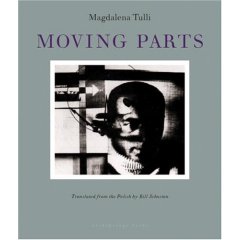 The self-referential ruse that literary fiction indulged itself in in the 1970s and 1980s has long seemed a thing of the past, with readers now apparently far too knowing to fall for a trick which constantly reminds them that what they are reading has been made up.

So, to try the ‘metafictional’ route with a novel written in the latter part of the twentieth century’s first decade is a very bold move indeed but one that the Warsaw-based writer Magdalena Tulli takes without any reticence.

In a book where the only character of any resilience is ‘the narrator’, the phantom-like presence who fails miserably to spin a decent yarn but is the only ‘person’ to make it through the book from uncertain beginning to an end where all unravels before his eyes, Tulli takes us on a journey in which an initially solid cast of characters melts into air with each turn of the page.

Although this oblique tale does recycle the well-worn trick of reminding the reader that he/she ‘produces’ the writing as much as receives it by picking up a book, it does so in a highly-rigorous manner that required a good deal of intellectual bravery from Tulli. In the first pages we are reminded that to create a narrative - with plot-line, characters and themes - is an absurdly difficult task which is almost doomed to failure before the writer sets about his or her task, trapped as he/she is in the limitations of language. But then Tulli sets about undermining this - her own assumption - by creating metaphors for the writing process which sporadically germinate into mini-stories of their own, until they too dissolve under the apparent difficulty of keeping them alive.

So, for instance, we are first introduced to a pair of trapeze artistes who are sitting with one another in a hotel but have only been conceived into being by virtue of a circus trope that the ‘author’ has conjured for creative act of putting pen to paper in the first place.

And so it goes on. At times, we slip back into a dry, almost barren examination of the tribulations of the writer’s craft, then at others this blossoms into another page-turning mini-tale, which will either come to a grinding halt, only to reappear again later along the ‘story’, or drift ethereally beyond the reader’s memory altogether.

European literature used to pat itself on the back about this type of novel before post-modernism allowed itself to become another form of pap, in which reading became ‘easy’ once again. Some people will be turned off after the first five pages but that is their loss. True escapism from the rough and tumble of everyday life in the end comes in the form of true engagement with what makes it all so difficult.