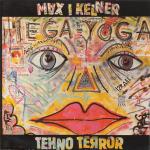 When you have been playing music for 25 years, as Robert Brylewski and Pawel Rozwadowski – aka Max i Kelner - have, one temptation among a certain breed of journalist might be to label them ‘rock dinosaurs’. But in this case that would be worst of slurs, though for them the alternative of referring to them as legends of the Polish rock scene is one they also find objectionable.

Between them, they have played in no fewer than eight different bands since they first picked up their instruments, which too have become increasingly numerous as the years have ticked by. Some of these groups, such as Armia, Kryzys and Izrael, have long earned their place in the Polish rock hall of fame, but it is in their guise as Max i Kelner, that this commentator, for one, feels they have excelled themselves.

“It all started as a project that we called T34,” said Brylewski. “It was a secret band, which we did not publicise to the media or anything. This was during the Communist period and we used very simple machines, such as cassette players and also recordings of the bullshit TV we used to hear at the time.”

In 1992, this evolved into Max i Kelner and they went on to produce what is frankly an amazing album – named Techno Terror -  and its impact has been such that it was re-released late last year to great acclaim. It is genuinely a classic.

In my time writing about Polish music for this and other publications, I have encountered plenty of bands who could knock out a decent tune or two. But that is not what you really want – at the end of the day - if you like your music. What you want is to be blown away. As this is my last band profile for WiK: English Edition, I can say that there are only four Polish albums I have listened to which I think are up there with the best. My choices in all probability suffer from the usual flaws, of ignorance of what else has been out there and rejection of whatever does not conform to my taste, but there you go, those ingredients are central to the whole art of reviewing.

So, the albums I believe have been the best in Polish music over the past five to six years are: ‘Mike’ by the-now sadly-defunct trip-hop band Diszobaba, the first Cool Kids of Death LP, whose rhythmic rage almost had me staging a one-man riot, Lao Che’s ‘Powstanie Warszawskie’ (Warsaw Uprising), an act of such outrageous ambition that it should have never been allowed to work, but did, stupendously, and ‘Techno Terror’ by Max i Kelner.

What makes this album so special is that you have two punks dabbling in the apparently foreign-to-them genres of anthemic pop, electro-funk, hip hop and the deepest dub reggae and beating the regular practitioners hands-down by being utterly cavalier. This shouldn’t be interpreted as unprofessional, by the way. These guys have so much experience and talent that they wouldn’t be able to conjure up a mediocre song if they tried. Each track is as tight as the [Polish] National Health service budget. Okay, so the vocals are a bit rough at times, but that only lends itself to the urgent, edgy quality that this album oozes at every turn. Right till the end, their sheer enthusiasm burns brightly.

Now well into their 40s, artists like Max i Kelner are the future of music. Good mates, still angry at the political nonsense they have dealt with since they were younger, when they were beaten by the ZOMO, and sitting there every day on the settee strumming a few notes, they are the antithesis of all that is shallow and crude in our culture today. All power to their elbows.