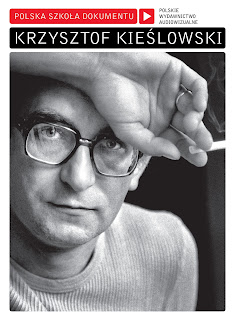 The Profound Simplicity of Krzysztof Kieslowski

A young woman in a flowery dress mounts a factory work bench and calls her workmates forward to join her in their daily ‘exercises’. Though she takes her role extremely seriously, it becomes clear from her smiling colleagues that they find the barely strenuous stretching she drills them in a touch amusing. So does the film director. With his camera trained on the young woman, he allows her to disappear from view to touch one of her toes. Appearing once more for a second, she leaves the shot yet again with another stretch.

This gentle lampooning of his characters was a common enough ploy in Krzysztof Kieslowski’s films, yet one that is often passed over by critics. Think of the elderly woman in the ‘Three Colours’ films struggling to reach the hole of a bottle bank, or Irene Jacob’s eyeful of a flasher from a park bench in ‘The Double Life of Veronique’. Though his films are layered thick with portentous meaning they tend to halt the gravity every now and then so that we can observe life in all its mirth-making absurdity.

The same goes for his documentaries, twelve of which are to be released on DVD –with English subtitles – for the first time ever in June. The scene above is from one of his earliest, entitled ‘From the City of Lodz’, made in 1969. The rest span another decade or so and treat us to as much moving drama by focusing on ordinary people’s lives as Kieslowski’s more famous feature films did with their portrayals of their characters’ often futile battles against fate.

Some of the documentaries, such as ‘We Were Soldiers’ (1970), ‘X-Ray’ (1974) and ‘Talking Heads’ (1980), are arresting studies of various individuals sharing their perspectives on a given theme. In the first, Second World War veterans tell vividly of their experiences on the battle-field and of how they dream in colour, yet all are blind due to wartime injuries. In ‘X-Ray’ male tuberculosis patients speak of their frustration at redundantly wasting away in hospital. The third film takes us through a journey of the generations, with each person being asked what their aims in life are. It begins with a baby burbling incomprehensibly in reply. It ends with a very elderly woman, over 100 years old, answering the question with the words “to live longer”.

Others, such as ‘From the City of Lodz’, focus on people in social situations but they always home in on the awkwardness and sometimes pain of being an individual - for however fleeting a moment. Capturing the profundity in simplicity was always Kieslowski’s trademark and it can be found in abundance in these documentaries.
Posted by Unknown at 06:27