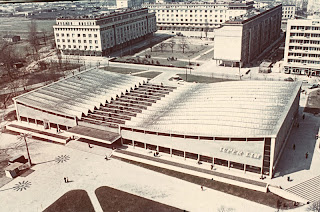 Originally published by the now-defunct magazine, Poland Monthly, in May 2007.

In Defence of Communist-Era Architecture

“Ugly” and perhaps “monolithic” are the two words that spring immediately to mind when one considers the buildings that the Communist-era bequeathed to Poland. The idea that they might be worth protecting would probably seem like a joke to most people.

Yet in Warsaw, there are inhabitants who are passionately dedicated to their preservation and who regard the often soulless office buildings that have sprung up in their place as committing the same crime against aesthetics as any hulking apartment block in the suburbs.

To the untrained eye, the structures that the group of amorphous but committed campaigners – consisting largely of art historians, local architects and other intellectuals – are bent on protecting may not seem like the most beautiful buildings anyone has ever beheld. Included among them is the city’s central train station, the now-demolished ‘Supersam’ supermarket, which was located near Plac Unii Lubelskiej, and the ‘Rotunda’ building on Marszalkowska, home to the PKO BP bank and also a common meeting place for Varsovians.

“When people talk about ‘Communist-era’ buildings, to my ears it sounds like someone is trying to glorify the period, but this is not the case at all,” said Jakub Szczesny, partner at the Centralna firm of architects. “What we are trying to do is highlight the best examples of Polish architecture, which are often very avant-garde. These buildings were designed by some of the most daring architects, who were working against the system, against the ruling regime and against the mental poverty of the time.”

Though attempts to save the Supersam building - which was designed and built during the early 1960s – proved fruitless, the combined efforts to halt its destruction have led to an energised initiative, to stop the same happening again; on the part of those who see architecture as central to the fabric of our lives.

The campaign to prevent Supersam being flattened began when art historian and editor of the sztuka.net website, Pawel Giergon, became interested in its fate while researching his MA thesis. When he heard that there were plans to bring the bulldozers in, he went into action.

“It turned out that the company that owned Supersam wanted to tear it down and build a large modern structure in its place, since the building was, allegedly,  in a poor technical condition, which was not true,” said Giergon. “I decided to try and save Supersam as a unique architectural specimen dating from 1960s Warsaw.”

His passion for the building led to his one-man protest winning other adherents to his cause.

“I posted a petition on my website which I asked people to sign and which I then sent to the conservator,” he said. “This lasted a few months and 2,200 people put their names against it. These were not every day people. They were those who took an interest in architecture, history and Warsaw.”

Alas, despite Giergon’s efforts, Supersam was demolished last year. It will be replaced by a 50,000 square meter office and retail project, to be developed by the Polish companies Juvenes and BBI Development NFI, who are scheduled to deliver it by the end of 2009/start of 2010. For Giergon, the event is little short of a tragedy.

“There was no such building of this class in Warsaw and in Poland only the Spodek [concert hall] in Katowice compares to it; this is because both buildings were designed by the same architect, Maciej Krasinski,” he said. “They were 20 years ahead of anything that existed in the USA and Europe.”

Though a number of other people share these sentiments, the body that was crucial to Supersam’s survival - the regional conservator’s office - held a different view, though part of what informed its position was caused by some confusion in the law.

“Based on the rules concerning the protection of monuments, the buildings constructed during Communism cannot be considered ‘historical’,” said Maciej Czeredys, deputy head of the Mazowiecki conservator’s office. “There has always been a border between what is considered modern art and historical art. The idea behind ‘Supersam’ was modern, not something taken from history. There is a problem in that there is a gap in the law. We have quite strict and well-defined rules about how to protect historical monuments but we don’t have precise laws on how to protect modern buildings.”

For many experts this situation is unacceptable and the obvious solution is that the law should be changed.

“By destroying Supersam we are showing that we have a problem with post-war architecture,” said professor Waldemar Baraniewski of the Institute of the History of Art at Warsaw University. “We should broaden the concept of "monument" so that it includes objects built from the period of late modernism to today.”

At the root of the whole debate is the philosophical question of what we mean by ‘history’. For a number of people the answer is simple: anything that constitutes the past, but for others the explanation is trickier.

“The situation is very difficult because a lot of these [modernist] buildings were not designed to last for centuries,” said Czeredys. “Supersam was an experiment, an attempt at innovation as far as its materials and technology were concerned. If we had tried to upgrade the building, we would have to have changed all the materials that were used, but if you talk about protecting buildings you have to apply the original technologies, which is not possible in the current circumstances.”

But for a lot of local architects, whose job it is to deal with the problem of materials and technologies on a daily basis, this argument is dubious.

“Supersam was an excellent example of modern architecture,” said Romauld Kruszewski, partner in the Jasinski Kruszewski Architekci firm of architects. “In another country, such as Switzerland or Spain for example, they would have found the money to repair and refurbish this type of structure and not rely on easy excuses that the building is old and falling down.”

With Supersam gone, enthusiasts for Poland’s post-war architecture have plenty of other buildings they can expend their energies on in defending, though a crucial element to this is ensuring that they offer a different experience to their users than has to date been the case. Warsaw’s central train station, they argue, is a building worth preserving but internally there is much that can be improved, as anyone who has tried to negotiate its labyrinthine innards will testify.

“We have to make these buildings live, to give them a second life,” said Szczesny. “Functionally they do not really work, and the central station is a good example of this. It is totally out-of-date. We should be trying to find a new way of adapting this beautiful but totally useless building, from the point of view of the city’s contemporary needs.”

The option of knocking it down is one the architect will have no truck with.

“We really do have to fight against this stupidity of commercial pressure that is taking place today,” he says.
Posted by Unknown at 12:08