Guest Blogger: Peter Sampson: When the Heat Beats Down on Beijing 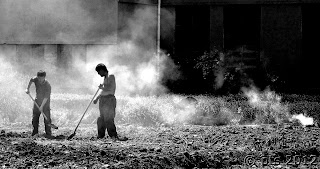 When the Heat Beats Down on Beijing

The rising temperatures combined with the humidity and  pollution don’t so much as envelop as throttle China’s capital at this time of year.

In Beijing, winter is cold and dry and long. Spring comes and goes in the blink of an eye, and summer returns with a glorious vengeance. Temperatures rise towards 40 degrees as the weeks pass.  Expats gather in beer gardens, to bask in the long awaited sun. Chinese ‘beauties’step out gingerly into the day, umbrellas clutched to protect them from the dread of tanned skin.

Migrant workers work hard, and long, constructing the new China, in all its strange and often ugly beauty.

This summer, the foreign – ‘alien’, in the language of government officials   – community is feeling a little unwelcome.  An official ‘one hundred days’ of check-ups began a few weeks ago, specifically in relation to visas, housing registration and work regulations.

All foreigners in Beijing need to have the correct visa and have to register their address with the local Public Security Bureau upon arrival in the city. Officials have declared that they will be stopping  foreigners in the street to enforce these laws - in bars, in hotels, in shopping malls, or wherever they may spend their time -  and have advised that passports and housing registration paperwork should be carried at all times.

No-one really knows how rigorously this campaign will be pursued over the hundred days. Smoking bans and anti-prostitution campaigns are two examples of government-led campaigns that have been routinely announced and apparently then abandoned. Smoking and prostitution continue to be as integral to Beijing life as roast duck and dumplings.

Neither does anyone really know why the campaign was announced. The dispute with the Philippines, perhaps? The publicity surrounding the death of a British businessman and alleged links with power struggles going on within the Communist Party? The much publicised recent incident in Beijing, in which a British man was filmed assaulting a young Chinese woman and then being beaten by a group of Chinese? The fall-out from the blind Chinese activist’s escape from detention, and eventual flight to America? Like the recent campaign to put Beijing’s public toilets to a two-flies maximum test – which sounds both difficult to manage and a little unfair on flies – no one quite knows why.

The visa campaign may be simply a symptom of China’s ongoing attitude towards the wider world and foreigners on its turf – one that’s been described by commentators as a strange mix of a superiority and inferiority complex. It’s a love-hate relationship, some say, within which both the Chinese and foreigners, to varying degrees, play out their roles.

If news of an anti-foreigner campaign, including home visits and hotlines by which local Chinese are encouraged to inform officials about ‘suspect’ foreigners, gives the impression that foreigners live oppressed lives under the iron fist of Chairman Mao’s legacy, then it is a false one.

In Beijing, almost anything is acceptable, as long as it is done ‘quietly’, and the right price is offered - or the right relationship cemented. The Great Firewall of China, as the internet censorship is known here, can be overcome by purchasing a VPN to throw an IP address out of China. So the daily Facebook fix, should it be required, is still available at a small cost.

Most of the pressures under which Chinese people live – fear of the future, including retirement and health costs, the complex set of relationships in China that often determine life chances, rising property prices, low incomes, distrust of the political and legal framework, the pace of development and its impact on families and communities – are not factors which impact directly on ‘aliens’ living here.

The living remains relatively easy for many expats in China and the huge pool of migrant labour in Beijing means that what might be perceived as indulgence elsewhere can be part of everyday life. Want someone to clean cook and wash for you? A foot massage by a pretty girl from Sichuan? Fancy having someone to drive you around, perhaps, or walk your dog while you feast on a rare dish from Yunnan in a local restaurant? The number of migrant workers, combined with no safety net and the apparently value-free pragmatism of many Chinese, means that many foreigners can, in effect, create their own menu of weekly services to get them through the day. As, indeed, can, and do, the newly rich Chinese.

Through the eyes of China’s poor and disconnected - or even the new middle class, which is able to buy as many iphones as it likes, but not to choose it’s leaders - how does contemporary China present itself, and if blame is to be apportioned for any shortcomings, at whose door? The absence of any real means by which blame or protest may be focused internally, means that the foreign community can become a target, especially when encouraged by the state-controlled media.

Where does all this leave foreigners in Beijing, and China more generally?  Wiser men, and women, than I may speculate, but barring another Boxer Rebellion or Cultural Revolution, and assuming continued economic growth, foreigners will no doubt continue to arrive on Chinese shores in search of opportunity, adventure, and indulgence. The messy business of how those ‘aliens’ interact with and are received by China  may continue to tie up observers and government officials in the most complex of  knots  for some time to come.

Looking back,   www.chinasmack.com has some wonderful but achingly sad images – of illustrations created in the aftermath of 1949. They looked to the future – to now - and anticipated a wholly different China to the one which both locals and foreigners now experience.

Peter Sampson has lived in China since 2009. He first visited Beijing in 1992, and really didn’t know what to make of the city.
His first published article, in 1993, was for The Guardian G2 – ‘My Time’ – about his experiences as a Prison Officer in the UK.

Peter was published in The Birmingham Post print edition in 2011: ‘Letter From Beijing’.

He has also written occasional pieces for The Stirrer and The Birmingham Press online, including: ‘When I Think of England’, ‘Chinese Crackers’ and ‘If I Don’t Know You, You Are Like Air’.

His photographs taken around Beijing can be viewed at http://ptsimages.crevado.com/#56172 and   www.ptsimageseast.crevado.com
Posted by Unknown at 08:15