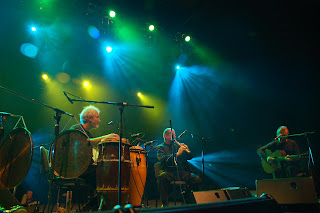 Spontaneity and age are rarely seen as natural bedfellows. With each passing year, so convention goes, we are meant to exercise evermore caution in our lives, exert more control, leave less and less to chance. Opening up yourself to the range of infinite possibility is commonly thought to be reckless, immature and recipe for disaster.

The group Osjan, however, go determinedly against that particular grain. Formed almost 30 years ago in Krakow and claiming themselves to be “the oldest band in Poland”, Osjan’s output is almost completely improvised, with the band members insisting that their approach is considerably more radical than others – such as jazz or folk musicians - who routinely embark on their own versions of an aural mystery tour when on stage.

“A special energy comes from the fact that the act of creation happens there and then,” said percussionist Radoslaw Nowakowski, who joined the band in 1978, to WiK: English Edition. “The biggest difference between Osjan’s music and folk or World Music is that people who play those tend to study a particular genre - such as Jewish or African music - and its harmonies and rhythm patterns and so on. The background for them is very clear.

“But we look for the most fundamental bricks. The bricks are then used to build a rhythm pattern, a harmony, melody or scales. It is as if we go on stage with a pile of bricks and stones and try to build perhaps a beautiful or even ugly edifice. It can be a palace or a railway station or a block of flats.”

Listening to Osjan it is indeed difficult to come up with an easy category within which you might place them, though the sounds that waft from the speakers don’t hint at too many contemporary influences, such as soul, hip-hop or punk, for instance. It is also very hard to discern much that might be called ‘Polish’ either, with the elaborate assemblage of instruments they clearly have at their disposal more often evoking the lazy humidity of the tropics, than the cold urgency of northern Europe. Devotees of the three-minute pop song may find little they can relate to in Osjan’s music, unless of course they loosen up a little.

“We are open to everyone but not everyone wants to be open to our music,” said Nowakowski. “It is not a question of  people’s intellectual level, but a special kind of sensitivity. Osjan’s style is different to what you usually find.  Some people call it World Music or  New Age but we call it “the music of flying fish”.”

Despite the apparent intangibility of their output and its distance from the harsher rhythms of rock and pop, Osjan have managed survive three whole decades and are well into their fourth – though there have been the inevitable line-up changes along the way. They would seem to have pulled off the age-old trick of rising above the historical fray - and all its attendant revolutions in fashion and taste - and sticking to their guns come what may, which has typically involved the band members taking long sabbaticals to immerse themselves in other projects before gravitating back toward one another when the impulse takes them. Planning almost nothing and trusting their instincts have helped make Osjan among the more respected veterans of the Polish music scene.

“It very good to maintain a state of mind when you don’t know what is coming,” said Jacek Ostaszewski, the group’s founder and its wind-instrumentalist. “Because in this way you can realise more firmly what really does need to be done. It is when we don’t know who we are, that we can truly express ourselves.”
Posted by Unknown at 15:02