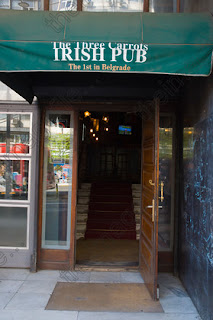 It's the nightlife that has everyone raving about Belgrade, whether the clubs throb away underground or judder up and down on the Sava. Guidebooks do it, even national newspapers do it, they all writhe in desperate homage to the hedonistic Mecca that is the Serbian capital.

It is a natural development, really. Serbia, the outcast of Europe in the 90s, would always become the next big thing in rampant partying after the other post-Communist countries descended into their own - sometimes peculiar - brands of respectability.

With the Brit stag-nighters making an unholy mess of the likes of Krakow and Vilnius, the discerning clubber, perhaps weaned onto Serbian fare via the EXIT festival, has had Belgrade to look forward to as a more wholesome alternative. A place where you can dance without some drunken idiot giving you bother, where the locals have yet to be turned off by your presence and where a night out is still not going to break the bank, the Serbian capital would seem to have it all for the punter who just wants to party in peace.

However, that is not the whole story. I for one have often been puzzled by the hype surrounding the fabled Belgrade 'scene'. Yes, you can have a great time here and the clubs are refreshingly free of violence and pretension, in the main. The music can be the bees knees and all. But is that it?

I arrived here after stints in St Petersburg - where impromptu stripping wasn't unknown - and Warsaw - where the urge to dance on bars and tables seemed irresistible to many - and have so far have had little reason to raise my eyebrows at the nocturnal goings on in this city.

Because it isn't really clubbing that defines the capital's experience after-dark, it's the cafes, though they seem to do a roaring trade whether it's Monday morning at 11am or 9pm on a Friday.

Whatever the time of day in this city, there is always a sweltering mass of bodies huddled around tables and haggling over conversations.

I wondered into Terazija just after the pro-Karadzic riot had ended in July, tripped over some rubble and noticed that loads of people were chin-wagging their way through the evening in the Hotel Moskva cafe and Biblioteka as if absolutely nothing had happened right there, just outside. Was it the abundant cigarette smoke that we have all come to know and love from living in Belgrade that prevented them from seeing that riot police and youths had been pummelling one another? Or was their nattering time post-work far too precious to pay heed to something as unseemly as an anti-social disturbance? Or were they just completely mad?

Brushing myself off of rubble dust, I could almost imagine a brick flying through the window of the Moskva and being caught nonchalantly by one of its patrons, while he/she (most probably ‘she’, as women tend to be the majority in the city’s cafes) lit up her next fag. "And anyway...", she would continue.

Ultra-cool Belgrade cafe society may be, inclusive it is not. True, it avoids all that nonsense of posing and 'people watching' that Paris and even London are supposed to get up to. Talk, caffeine and nicotine are the sources of this city's main vibe. But, let's face it, anything sociable that eschews alcohol is placing itself off limits to strangers and often has its head right up its own backside.

Booze is the fuel that drives us into the unknown, that barges past convention, that gets us talking to the person we've just brushed against on the way to the toilet. It can also turn you into a boorish wreck but that risk is evident the moment glass makes contact with lip.

This is not something I have had much cause to say since I started living in Eastern Europe, but it could well be that Belgraders just aren't consuming enough alcohol.

There are positives in this. At least in this city a walk along the pavement does not resemble a scene from 'Dawn of the Dead', as it can in some parts of St. Petersburg or Warsaw that I know of, such are the number of drunks sashaying from one end to the other.

But when I go to my favourite haunt in Belgrade, the Three Carrots Irish pub, I feel I can see Belgrade's future. Sitting up at the bar there is a homely experience, once you've done it a few times, and although it does afford the odd pleasure of anonymity as you blend in with the other amorphous boozers, you know that at any minute someone could park themselves next to you and conversation will begin to flow.

Yet aside from a few very pleasant exceptions, the companion has invariably turned out to be male. According to one of the bar staff I spoke to, women don't want to drink at the bar because they are worried about being associated with the 'drunks' who gravitate there.

That includes me, clearly. Though apart from getting a bit sleepy after a jug too many, neither myself or any other of the 'Three Carrots' stalwarts have done anything untoward and it as trouble-free a joint as you will find anywhere in the city.

So let the pub triumph over the cafe in Belgrade, 2009. Fags are foul, coffee is crud and beer is boss.

This can also be read along with this, my first ever 'Comment is Free' piece for The Guardian, published very shortly after the article above.
Posted by Unknown at 17:20